Diamonds and gold are strange bedfellows. They very rarely appear in the same rock, but when they do, their unlikely marriage can signal the presence of abundant riches. 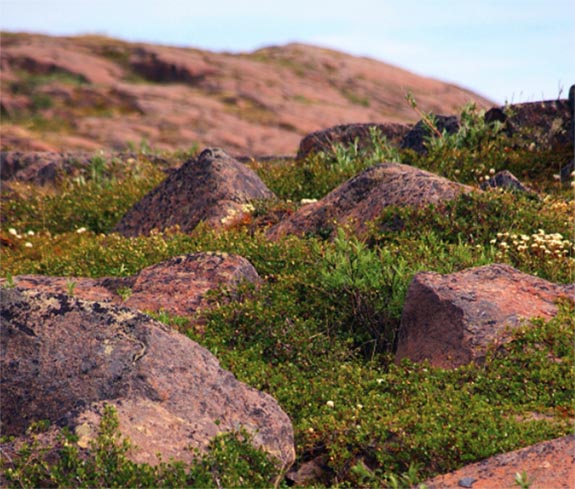 The unusual rock samples collected by University of Alberta researchers from an outcropping on the Arctic coast of Canada’s Far North have close similarities to those found at the Witwatersrand gold deposits of South Africa, which account for 40% of the gold ever mined on Earth.

“The diamonds we have found so far are small and not economic, but they occur in ancient sediments that are an exact analog of the world’s biggest gold deposit,” said U of A researcher Graham Pearson.

Pearson said the outcrop of rocks, known as conglomerates, are basically the erosion product of old mountain chains that get deposited in braided river channels.

After bashing off 15 kilograms (33 pounds) of Nunavut conglomerate, the scientists dated the rock fragments using state-of-the-art mass spectrometry equipment at the U of A. They concluded that the rocks had been deposited about three billion years ago.

Even more exciting was the revelation that the modest sample contained three diamonds.

“My jaw hit the floor,” said Pearson of the moment he learned about the diamond content. “Normally, people would take hundreds of kilograms, if not tons of samples, to try and find that many diamonds. We managed to find diamonds in 15 kilos of rock that we sampled with a sledgehammer on a surface outcrop.”

While the diamonds all measured less than 1mm in diameter, the geological implications were huge.

Pearson surmised that there must have been a kimberlite pipe that had transported the diamonds to the surface from deep within the Earth.

“It tells us there’s an older source, a primary source of diamonds that must have been eroded to form this diamond-plus-gold deposit,” he said.

This also means mining diamonds in the area would not necessarily require very deep mines.

Researchers will be doing more research to establish the extent of the diamonds and gold in these rocks, and the possible primary sources of these minerals.

Credit: Nunavut photo by Xander, CC BY 2.0, via Wikimedia Commons.